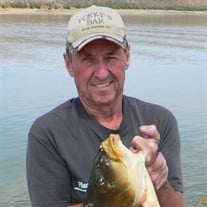 Dad was born August 19, 1944 in Rock Springs, Wyoming to Walter Keywatz and Melba Christine Bellmann. Dad graduated from Rock Springs High School in 1962 and then went on to Electrical Technician School located in Denver, Colorado. He was drafted into the military where he served in the Navy as a submarine sonar technician. He served 2 years on the USS Ben Franklin (SSBN-640) and finished his 4 year service on the USS Flasher (SSN-623). He worked for Schlumbergef as a logger, FMC and retired from Jim Bridger Power Plant in 2005 after 30+ years of work. Dad was happily married over 50 years. He was blessed with 3 daughters.

Dad loved his family and friends. He spent many hours with them fishing, hunting, camping and 4-wheeling. He was a “Jack of all Trades”, whatever he needed to do or wanted to do he would learn and do it. Upon his retirement he took up woodworking and would show and share his creative abilities by making beautiful pieces of wood creations. He loved automobiles and loved restoring cars. His 1956 Chevy truck was the love of his life and he was seen many times parading about town along with his other love, his white poodle, Cupcake. Dad never knew a stranger. People were always drawn to him and he would do anything to help people out.

He is survived by his loving wife Violet Dee Robinson, his daughters Tammi (Doug) Sumsion, Tina (Todd) Julius and Toni (Craig) Doney. He had 6 grandchildren, Bryson, Tayler and Kensi Sumsion and Annabella, Josephine and Jude Doney. His sisters Eunice Farrell, Jeannie Collier and Garnet Nichols. He is also survived by many nieces and nephews.

He is preceded in death by his parents, a brother Frank Keywatz who died in infancy and an adopted brother, Bert Madden.

A special thanks to all those who have shown their love and support throughout these past several months. Also, a huge thanks to our cousin, who is more like our brother and his wife, Mike and Trish Farrell, who have sacrificed their time to be by mom and dads side and for taking the time to help when we couldn’t be there. We Love You ALL.

Funeral services will be held at 3pm Saturday, September 18, 2021 at The Church of Jesus Christ of Latter-day Saints on 1109 Tulip Drive (off of Foothill Blvd) with the family receiving visitation an hour prior to services. Entombment with military honors will held at a later date. Condolences may be left a www.foxfh.com

To order memorial trees or send flowers to the family in memory of Bert Timothy Keywatz, please visit our flower store.