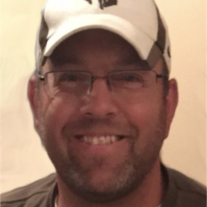 Daniel Michael LaRose Daniel Michael LaRose, 49, passed away April 19, 2019 after a week-long courageous battle with an aggressive form of lymphoma, not surprisingly the same week that our Lord and Savior carried out His atoning sacrifice for all mankind. He fittingly died on Good Friday. Dan graduated from Bellevue West High School, Bellevue, NE; attended Hastings College in Hastings, NE before transferring to Peru State College, Peru, NE earning a Bachelor of Science degree. He later earned a Masters degree in Education Administration from Grand Canyon University, Phoenix, AZ. Survived by wife Danel Renee LaRose, his children are Jayden Elizabeth LaRose (17), Dillon Jayman Michael LaRose (15), Emma Georgina LaRose (12), Greyson Daniel LaRose (8), Winnemucca, NV. His parents Daniel and Susan LaRose, Council Bluffs, IA, and Gitta and Bill Malkin, Australia; siblings Ken LaRose (Dan Miller), Omaha, NE; Randy LaRose (Jenna), New Haven, CT; Anthony (Staci), Abu Dhabi, UAE; brother Jason Malkin (Jacqui), and sisters Monique Allen (AJ), and Michelle Mallitt (Justin) all of Australia. In-laws Georgina and Kurt Hopkin, Cody, WY; Daniel and Cindy Heidelberg, Omaha, NE; sister-in-law Cherish Yenzer (Drew), and numerous nieces and nephews. Predeceased by father-in-law Ronald A Draur, MD, with whom he shared a special bond, and grandparents and aunts and uncles. Dan loved all sports, but basketball was his favorite. He was an avid basketball player and inducted into the Peru State Basketball Hall in 2007. His love of basketball lead him into coaching High School Basketball for the Burlington Huskies in Burlington, WY where he lead the team to the State Championship in the 2005-2006 season. His dedication to basketball resulted in the Wyoming Coaches Association awarding him with “Coach of the Year “ in 2005-06. In an amazing fairy tale love story, Dan married his precious wife, Danel Renee LaRose, on October 24, 1998 for time and all eternity in The Church of Jesus Christ of Latter-day Saints Manti Temple, Manti, UT. They lived in Omaha, NE, Cody, WY, Green River, WY, and Winnemucca, NV, traveling to each place as Dan advanced in his career in elementary education. He taught in Plattsmouth, NE, then Burlington, WY where he was both teacher and a basketball coach. He later became a teacher in Cody, WY, which became a haven for him as he loved the students and staff, the rugged mountains and trails, rifle and bow hunting deer and elk, and every aspect of abundant wildlife. There he lovingly served the people in the community he treasured. He then traveled to Green River, WY where he was both a school administrator and a boys basketball coach. He taught in Rock Springs for a year, then went to Winnemucca, NV to be the Vice-principal at both Sonoma Height’s Elementary School, and later French Ford Middle School, where he was also the principal of Orovada School k-8, a remote 32-student rural school. Compassionate and caring describe Dan and his outlook on life. He was always first to volunteer to serve others. His love for the gospel of Jesus Christ was firm and steadfast, and sharing the gospel in various wards as LDS Ward Mission Leader his calling. As a convert to the church himself, his heart was committed to the gospel, and service was his life's motivation and never-ending cause. He adored his wife, children, and family, delighted in working with all school children, and was driven to help make men out of the teenagers he coached on his various basketball teams. He will be missed by all whose lives he touched. Visitation will be in Green River, WY, Wednesday, April 24, 2019 (6-8pm) and 1 hour prior to service. Funeral Services, Thursday April 25, 2019 (11am), both at The Church of Jesus Christ of Latter-day Saints, 120 Shoshone Avenue Green River, WY. Graveside Services will be Friday April 26, 2019 (11am,) Riverside Cemetery, 1721 Gulch Street Cody, WY (main entrance). In lieu of flowers, donations may be directed to the family either on Facebook “Go Fund Me” or directly to the family. Condolences for family can be left at www.foxfh.com.
To order memorial trees or send flowers to the family in memory of Daniel Michael LaRose, please visit our flower store.