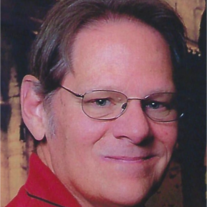 David Glen Corhn David Glen Corhn, 60, of Rock Springs, passed away December 18, 2019 at Memorial Hospital of Sweetwater County. He was born October 21, 1959 in Rock Springs, the son of Dewey and Susan Diehl Corhn. He attended schools in Rock Springs and graduated with the class of 1979. He later attended Western Wyoming community college. David married Miriam Schmidt November 1, 1979 in Rock Springs. She preceded him in death January 3, 2017. He worked at Genesis Alkali for 40 years as a lab analyst. He was an instructor for Pineda’s Kenpo Karate. He was a member of Cowboy Joe Club, White Mountain Golf Club and The Holy Spirit Catholic Community. He enjoyed golf, hunting, camping, traveling, and all forms of theater. He loved playing Santa Claus, joking around and teasing his friends and family. David’s last days were filled with love and he was surrounded by friends, family and three special ladies that he referred to as his guardian angels, Cathy Samsel, Tammie Smith and Mary Corhn. We will celebrate his life every day by remembering his smile, laughter, passions for life and his courageous fight against cancer. He touched so many lives and his absence will be felt far and wide. Survivors include his father Dewey Corhn of Rock Springs; brothers Danny Corhn and wife Mary of Green River and Gary Corhn of Rock Springs; sister Cherie Wood and husband Glen of Green River; and a large extended family of people that include long time friends Dan Isenhart of Beaverton, OR, Ray Zampedri of Rock Springs and his longtime friend and companion Cathy Samsel. He was preceded in death by his wife Miriam Corhn, mother Susan Corhn, birth parents, grandparents and his favorite uncle Gary. A Mass of Christian burial will be celebrated at 11:00 a.m., Monday, December 30, 2019 at SS. Cyril and Methodius Catholic Church, 633 Bridger Ave., Rock Springs. The Rev. Bill Hill will officiate. A vigil service with rosary will be recited at 5:00 p.m. Sunday, December 29, 2019 at the church. In lieu of flowers, family request donations in David’s name to Cowboys Against Cancer, Holy Spirit Catholic Community or a charity of your choice. Condolences for family can be left at www.foxfh.com.
To order memorial trees or send flowers to the family in memory of David Glen Corhn, please visit our flower store.