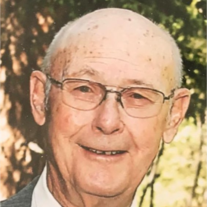 Dorland Edward Toone Green River- Dorland Edward Toone, 91, passed away peacefully surrounded by family on April 3, 2018, in Green River after a brief illness. He was born August 16, 1926 raised and lived in Green River most of his life. He graduated with the class of 1944 from Lincoln High School in Green River. He served in the Navy during World War II. His working career included the Union Pacific Railroad and later retired from Stauffer Chemical Co. Dorland was a member of The Church of Jesus Christ of Latter-day Saints. He was always a dedicated and involved member of his faith. His interests included watching sports, horses, playing pool and he so enjoyed visiting people. He was an avid reader and enjoyed many genres. He kept abreast of local and national events. Survivors include his bride of 70 years Patricia of Green River; son Barry, grandchildren Justin Toone and wife Erin, Crystal Toone and companion Leroy Evans and Jeannie Toone; daughter in-law Aldena Toone; brothers Jury Toone and wife Marjean and Kenneth Toone. He was preceded in death by his parents Eldred and Wanda, brother Byron and son Robin. Funeral services will be held at 11:00 a.m. Tuesday April 10, 2018 at the Green River LDS 1st Ward Chapel, 1000 W 4th North, Green River. A viewing will be held one hour prior to the services at the church. Interment will take place in the Riverview Cemetery, Green River.
To order memorial trees or send flowers to the family in memory of Dorland Edward Toone, please visit our flower store.