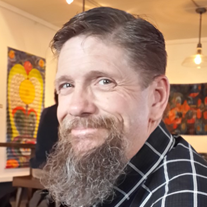 Doug Dellis Wall Rock Springs - Doug Dellis Wall, 55, of Rock Springs passed away June 4, 2018 at his home after a sudden illness. Anyone that knew this gentle, loving man knew he was very passionate about everything. Whether it was preparing food on his trusty smoker, trying to get the newest gadget up and running, or magically repairing anything imaginable to keep on the move as he was never idle. He had the uncanny ability to make friends anywhere he went, even if they were just passing by on the street. He was an avid hunter and fisherman, always happy to talk about his favorite stories with anyone over a hot cup of coffee. He more than earned the nickname 'McGuyver' and was often found repairing anything with items simply laying around. Doug was born in American Fork, Utah but he spent the last 28 years in Rock Springs, Wyoming. He graduated from American Fork High School (GO CAVEMEN) where he met his sweetheart, best friend, and Hunny Bunny, Monica Edwards Wall, married for 33 years. Doug was a master mechanic and spent his career as a heavy equipment mechanic. He worked at Bridger Coal Company for 10 years before becoming a Maintenance Supervisor for the same company. If he was not at work, he was working at home on any number of projects that were ever present. Doug is survived by his wife Monica Wall; his sons Dellis Wall and companion Hailey Redden of Hudson, Wyoming, and Kolten Wall and wife Christine of Lander, Wyoming; daughter Aubree Wall of Rock Springs; and lovely grandchildren Brodie, Roxy, Allison, Boe, with another grandaughter expected in August. He is also survived by his brother Mike Wall and wife Colleen of American Fork, Utah; sister Julie Shepard and husband Craig of Meridian, Idaho; and mother-in-law Marsha Edwards of Springville, Utah; 18 nieces and nephews. Doug was preceded in death by his father Lehman Wall and mother Peggy Wall, two brothers Steven Wall and David Wall, and father-in-law Ralph Edwards. Doug loved his family more than anything that the world could offer and would do anything for anyone. He loved and lived by the motto,” Family Is All You Got”, and will be remembered as the loving husband, son, father, papa, and friend that he was. Funeral services will be at 10:00 AM Monday, June 11, 2018 at Fox Funeral Home, 2800 Commercial Way, Rock Springs. Viewing will be one hour prior to the services at the funeral home. Interment will be at the Highland City Cemetery in Highland, Utah.
To order memorial trees or send flowers to the family in memory of Douglas Dellis Wall, please visit our flower store.