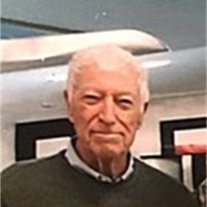 Rock Springs - Edwin John (Sody) Soderlund quietly left us on Tuesday January 29, 2019, to join his wife of 63 years, Connie. He is also preceded in passing by his daughter and son-in-law Nancy and Carl Nordstrom, parents John and Tynne Soderlund, great-grandson Jayce Soderlund, and sister Elsie Pandalis. Sody was born in Ironwood, Michigan May 10, 1922. He attended schools in Miami, Arizona and Rock Springs, Wyoming and was a graduate of Rock Springs High School and the University of Wyoming. He married Cornelia Duzik in Rock Springs and together had one daughter and three sons. Following the attack on Pearl Harbor, Sody volunteered for the US Army Air Corps Air Cadets program and commissioned as a Second Lieutenant. He was assigned to the 396th P-47 Fighter Group in England and later France. He flew 78 missions, providing air support for Allied ground troops in France and Belgium, receiving multiple honors including the Distinguished Flying Cross, the Air Medal with Oak Leaf Clusters, and the European Campaign Medal. After being honorably discharged from the Army Air Corps, Sody continued flying for close to forty years, flying fire searches, game counts, and other humanitarian flights. Beyond flying, he had a long career in the insurance business and was co-owner of the Park Hotel. His other interests were many. Sody enjoyed boating and fishing, and was also an avid skier and golfer, scoring two hole-in-ones. Additionally, he was a past Exalted Ruler of the BPO Elks No. 624, and was a member of the Rock Springs Rotary Club, Lions Club, and Chamber of Commerce. He is survived by sons John Soderlund, Jim Soderlund (Laura Maltby), Jay Soderlund (Sara Escobio); granddaughter Alexis Whitehouse (Andrew), grandsons Christopher Soderlund (Lindsay), Matthew Soderlund (Stasha), Kyle Soderlund (Becka), and Eric Soderlund; great-granddaughter Kinzlee Soderlund, great-grandsons Kelton Soderlund, Henry Whitehouse, Jaxon Soderlund, and Tucker Soderlund. Special survivors include Bill McCurtain and family, and Will and Theresa Johnson. John, Jim, and Jay wish to acknowledge the long time service of Lynette, Dee Dee, and the staff of Sweetwater Respite Care, as well as, Stephanie, Heidi, Dr. John Iliya, and the Staff of Hospice of Sweetwater County, and personal physician Dr. Melinda Poyer. Graveside services and military honors will be conducted August 10th at 12:30 PM in the northwest corner of the St. Joseph’s cemetery. A Celebration of Life will immediately follow at the Park Lounge. The family encourages memorial contributions to Respite, Hospice, and Cowboys Against Cancer. Condolences for family can be left at www.foxfh.com
To order memorial trees or send flowers to the family in memory of Edwin John Soderlund, please visit our flower store.