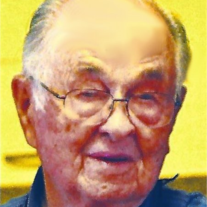 Glenn Duane Tucker Rock Springs - Glenn Duane Tucker, 91, of Rock Springs passed away June 5, 2018 at his home after a lengthy illness. He was born February 8, 1927 in Waltham, Minnesota, the son of Paul Tucker and Ruth Beck Tucker. He was the oldest of ten children. Glenn worked on his grandfather’s farm while growing up. He enlisted in the US Navy at age seventeen in 1945. He attended boot camp at Naval Station, Great Lakes, IL. He served on USS Mink and the USS Le Jeune. Later, after being recalled, he served on the USS Pittsburgh during the Korean War. Glenn married Jennie Case on July 17, 1949. She preceded him in death on December 14, 2014. He enjoyed woodworking, fishing, hiking, flying, reading, crosswords, writing and going to his Navy reunions. Glenn was self employed for 15 years. He was a boiler operator for 13 years for Allied/General Chemical and was a door greeter for Walmart for 15 years. He was a member of the VFW, American Legion, United Steel Workers (Local 15320) and the Memoir Writing Class. He was loved by children for his jokes and tricks. Survivors include his daughter, son and their spouses, 11 grandchildren, three great-grandchildren and one great-great-grandson. A Celebration of Life will be held at 11:00 a.m. Saturday, June 16, 2018 at the Holy Communion Episcopal Church, 255 2nd St, Rock Springs, WY. Rev. Dr. Bernadine Craft will officiate. Interment with military honors has taken place at the Rock Springs Municipal Cemetery.
To order memorial trees or send flowers to the family in memory of Glenn Duane Tucker, please visit our flower store.