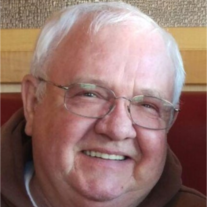 James “Jym” Edward Bock Rock Springs - James “Jym” Edward Bock, 72, of Rock Springs passed away Tuesday, January 30, 2018 at Cheyenne Regional Medical Center in Cheyenne. He was born June 27, 1945 in Auburn, WA, the son of George Edward Bock and Emma Jane Case Bock. He attended schools in WA and graduated from White River High School in Buckley, WA with the class of 1963. He also attended Green River College in Auburn. Jym was a veteran having served in the US Army during Vietnam War and Desert Storm. He married Pamela Golightly April 18, 2009 in Salt Lake City. He was a member of The Church of Jesus Christ of Latter-day Saints where he served a year as a ARP missionary. He was a resident of Alaska from 1974-2007, and still owns a home in Palmer, AK. He was an Alaskan book of knowledge. There wasn’t anything he didn’t know when it came to Alaska. He loved to fly both gear and floats, ice fishing, snow machines, traveling to historic sites, camping, and boating with his family. Jym was the reason his daughter Traci loves the snow, the woods and loves animals. Survivors include his wife Pamela G. Bock of Rock Springs; son Jeffrey Michael Bock, wife Felicia and children Sam and Sophia of Milton, FL; daughters Traci Christine Medford, husband Shaun and son Clayton Hoye of Bonney Lake, WA; brother George Bock and wife Teresa of Caldwell, ID; sisters Uretta Lykstad and husband Rick of Bonney Lake, WA, and Helen Crossler and husband Jim of Yuma, AZ. Memorial services with military honors will be held at 11:00 a.m. Saturday, February 10, 2018 at the Rock Springs LDS Stake Center, 2055 Edgar, Rock Springs. Friends may call one hour prior to the services at the church.
To order memorial trees or send flowers to the family in memory of James Edward Bock, please visit our flower store.