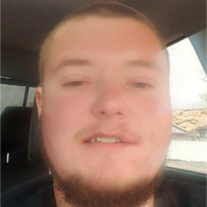 Jude Timothy Babbitt Rock Springs - Jude Timothy Babbitt, 23 , passed away suddenly on May 13, 2018. He was born December 9, 1994 in Ogden, UT, the son of Timothy and Christy (DeSalvo) Babbitt. Jude attended schools in Rock Springs and graduated with his GED in 2015. He worked as a roustabout and inspector in the oilfield. His interests included driving fast, fishing, and spending time with his girlfriend Kayla and her son Chance, teaching him how to fish and play t-ball, chasing and tickling his little buddy Ryan. Survivors include his parents Tim & Christy Babbitt of Rock Springs; brother Brock Babbitt of Rock Springs; sister Olivia Babbitt of Evanston; his girlfriend Kayla McCarty of Rock Springs; grandparents Bob & Cheryl Bryn’s of Ogden UT, Carla DeSalvo of Rock Springs; many aunts, uncles and cousins. He was preceded in death by grandparents Vicky & Eugene Babbitt, and Joseph DeSalvo, an uncle Boone Babbitt and a brother Sloan Babbitt. Funeral services will be held at 11:00 a.m. Saturday, May 19, 2018 at Fox Funeral Home, 2800 Commercial Way, Rock Springs. A viewing will be held one hour prior to the services at the funeral home. Cremation will follow. The family of Jude Babbitt respectfully suggests that in lieu of flowers donations in his memory be made to Jude Timothy Babbitt Memorial Fund c/o Wells Fargo, 1400 Dewar Drive Rock Springs WY 82901.
To order memorial trees or send flowers to the family in memory of Jude Timothy Babbitt, please visit our flower store.