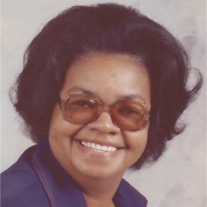 Kathryn Louise Jackson The life of Kathryn Louise Jackson began on February 2nd, 1932 to the union of Robert Sr. and Edna Mae Sweets in Clarinda, Iowa. Kathryn was the fourth of eleven children, four brothers and six sisters. She spent her time helping on her fathers farm along with her siblings. When her father heard about cheap land available in Wyoming he sold his farm and moved his family to Rock Springs, Wyoming. Robert Sr. purchased land and raised chickens, horses and pigs. Her mother Edna built a café they called the Sweets Café & Bar where she and her sisters helped cook, served food and waited tables. They were always busy because of the good food and friendly atmosphere. She met and married Amos Jackson in 1948, to this union six children, three boys and three girls. Kathryn loved to dance and watch television with her sister Patty and they would take turns meeting with their kids at each of their houses once a week. Kathryn, along with her daughter and others started The New Hope Baptist Church where she was one of founding mothers. She had several heart operations which caused her health problems. Her husband passed away in 2010 after 59 years of marriage. Kathryn took her last breath to be with the lord on Sunday morning March 25th, 2018. She will be missed by her family. Those left to cherish her memory are her daughters Edith Jackson-Norris of Denver, CO and Carolyn Jackson of Rock Springs; son Ron Jackson of Rock Springs; brother Jackie Sweets of Rock Springs; sisters Judy Sweets of Rock Springs and Martha Shackelford of Aliso Viejo, CA; grandchildren Brandon Jackson, Brad. Jackson Sr, Cory Jackson, Ty Jackson and Pamela Jackson; great-grandchildren Nico, Macy, Brandy, Brad Jr., Ebony, Nyrobi, Tess, Tayanna, Zoe and Caleb. She is preceded in death by her husband Amos Jackson, parents Robert Sr. and Edna Sweets, daughter Rebecca Jackson, sons Gary Eugene Jackson and Amos Jackson Jr., grandson Justin Jackson, sisters Patty Crouch, Geraldine Tullock, Betty Calhoun and Margaret Washington, brothers Robert Jr., Jerry and Clarence. Funeral services will be held at 12:00 noon Saturday, March 31, 2018 at Fox Funeral Home, 2800 Commercial Way, Rock Springs. A visitation will be held 5-7 pm Friday, March 30, 2018 and Saturday one hour prior to the services at the funeral home. Interment will take place in the Rest Haven Memorial Gardens, North Rock Springs.
To order memorial trees or send flowers to the family in memory of Kathryn Louise Jackson, please visit our flower store.