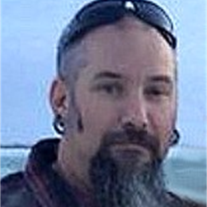 Kelly Dee Walk Kelly Dee Walk of Green River, Wyoming, born May 13th, 1977 died alongside his companion Michelle Powers on Saturday September 27th, 2019. He was born to Martin and Niki Dean Walk in Evanston, Wyoming. He was raised and attended school in Manila, Utah before attending the Weber ATC in order to receive a Machine Fabrication certificate. He was an avid fisherman, woodworker and handyman. Kelly could often be found starting projects that he would never get around to finishing. Instead, he would get distracted by his children, Addison, Ashton, Wyatt and his bonus children Ian, Rowan, Ayden, and Devlin. The amount of love he had in his heart for these kids was only matched for his love of Michelle. Kelly always finished one type of project; exquisite jewelry boxes, lavish play houses, and other immaculate wooden items for his daughters. As for his sons, Kelly lived to embarrass them. Whether it be dancing around the store, or doing general “dad” things around girls they were interested in, Kelly always brought an air of joy wherever he went. Not only did his humor and artistry shine through everything he did, but so did his incredible work ethic. Kelly would often pull long hours at his job of fifteen years at Ciner Wyoming to support his family and give them the closest thing to a perfect life as he could. Kelly was a lot of things, and lazy was not one of them. Kelly’s heart was that of gold, literally giving the shirt off his back to a stranded hitchhiker. He will be missed by all that he had came into contact with. Whether it be his children, friends, coworkers, or the server at IHOP whom he had struck up a 2 hour conversation with. Kelly is survived by his three biological children, Addison, Ashton, and Wyatt Walk. His four “bonus kids” Ian and Rowan Keele along with Ayden and Devlin Powers. His mother Niki (Allen) Baird, his step mother Lil (Ben) Kirk, his brothers Casey (Jamie) Walk, Cory (SuAnn) Walk, his best friend Troy Hanks and numerous nieces and nephews. He is preceded in death by his father Martin Walk, grandparents Guy and Lucielle Dean, Ed and Helen Walk and his mentor Harold Kern. Everyone is invited to a family tribute for both Michelle and Kelly which will be held at 1:00 pm Saturday, October 5, 2019 followed by a reception from 2:00 pm to 3:00 pm at The Church of Jesus Christ of Latter-day Saints Cultural Hall, 1000 W 400 N. St., Green River, WY. Condolences for family can be left at www.foxfh.com.
To order memorial trees or send flowers to the family in memory of Kelly Dee Walk, please visit our flower store.