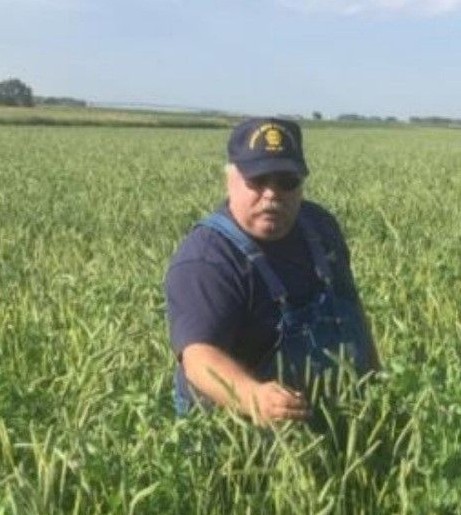 Lance Allen Herman, Rock Springs, WY took his final breath to pass into eternity in the Lander, WY hospital on Thursday, November 11, 2021 at the age of 64. Lance died from complications of Covid-19.

He was born in Rugby, North Dakota on a beautiful fall day September 16, 1957, the son of Harvey and Jeanette (Nelson) Herman and was raised on their farm in rural Towner, North Dakota.
He attended all 12 years of his schooling in Towner and enjoyed being a contributing member of the Class of 1975 as well as FFA, Student Council – serving as Senior Class president, track & field, band & chorus, Luther League, and the captain of the football team. Hard work and doing a good job were a big part of Lance’s life. While growing up he worked for Ted and Gilman Sjong for many years and had the opportunity to purchase their 1941 “little” B International tractor. Then he followed in his father’s footsteps working construction and then landed in the oil fields of Wyoming where he worked his way up to mentoring young hands and managing oil rigs for Cardinal, Apollo and Ensign Oil Companies. Lance owned the Eden Bar in Eden, WY for a time, and everyone remembers the big mortgage burning party in 1988 and all the live music that played at the bar throughout the years. Lance loved riding his Harley Davidson and road many miles touring around the country and he was an avid outdoorsman and did lots of hunting and fishing. Lance’s first love though was farming and ranching, and he created his own farm and ranch in Farson, WY where he raised cattle, alfalfa, and small grains for almost 20 years – he liked to say he was “outstanding in his field”.
Lance fell in love with Jamesena (Jamie) Babcock and they were married December 12, 2006 in Rock Springs, WY. Lance helped raise Jamie’s daughters as his own - Michelle and Nicole. Lance and Jamie worked side by side on the ranch until they retired in 2020 because of health issues. He had plans to move back to his childhood farm outside of Towner and live out his final years there. It’s hard to capture the true essence of a person’s life in a few paragraphs, what we know for sure is that Lance was loved, lovable and loving. He was a deeply caring man and always willing to give a helping hand wherever and whenever it was needed. He will be greatly missed especially because of his sudden and unexpected passing. It’s times like this that reminds us to hold those we love close and tell them often how much we love and care for them! We can rest assured knowing that because of the certainty of God’s love, strength, confidence, and support, that we will all find our way back to peace, that peace which surpasses all understanding. Let Thy will be done. Love the people God sent you, one day he’ll call them back.
Lance is preceded in death by his loving wife Jamie who passed away from lung cancer January 4 of this year, his father Harvey, sister Jacalyn Gangnes, nephews Nathaniel David Hall and Harvey Eugene Kubat, grandparents Cecil and Ida (Peterson) Herman and Olaf and Sena (Julson) Nelson.
Lance is survived by: Daughters - Michelle Cukale of Rock Springs, WY and her partner JoJo Bernal and grandchildren Addison, Quinton and Julian who called him Grandpa Lance and Nicole Cukale, Missoula, MT. Mother Jeanette Herman, Towner, ND; Sisters: Vicki (Terry) Kubat Langdon, ND, Penny (Larry) Herman-Polayes Morgan Hill, CA, Kathy (Woody) Hall Upham, ND. Brothers Kevin (Tracey) Herman, Gillette, WY and Kipp Herman, Watsonville, CA. Brother-in-law Gary Gangnes, Aptos, CA. Nephews: Troy (Gemma) Kubat, Brent (Amber) Kubat, David (Jessikah Kollaer) Polayes, Tyler Hoy. Nieces: Denise (Jon Fountain) Herman, Brittany (Matt)Tait, Brooke Kubat, Samantha (Anthony Zucca) Polayes and Hannah Polayes and 12 great nieces and nephews.
Coming from a big family, Lance has many relatives that have left the earth before him and lots that still remain. May we all find peace, joy, and love!
A viewing will be held for family and friends from 5:00pm to 7:00pm on Tuesday, November 16th, 2021 at Fox Funeral Home, 2800 Commercial Way, Rock Springs, WY.
A memorial service will be held at 12:00pm, December 11, 2021, at the Farson Community Center, 4039 US 191, Farson, WY.
Additional services will be held in North Dakota. A viewing will be held Friday, November 19th, 2021 from 5:00-7:00 pm Saturday, November 20th at Anderson Funeral Home in Towner, ND. Graveside services will be held at 11:00 am at Bantry Cemetery rural Bantry, ND. Fellowship after the graveside service at the Zion Lutheran Church in Towner, ND.
The family asks that memorials be sent to the following in honor of Lance: Zion Lutheran Church “New Chair” fund 107 4th Ave. SW Towner, ND and/or Bantry Union Cemetery PO Box 502 Towner ND 58788
Condolences for the family can be left at www.foxfh.com.

To order memorial trees or send flowers to the family in memory of Lance Allen Herman, please visit our flower store.