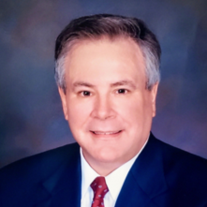 Green River- Lawrence Michael Slocki, 65, of Green river, WY passed away August 26, 2018 at his home after a lengthy illness. He was born January 11, 1953 in Fort Worth, TX; the son of Stanley Slocki and Emily Gecsey-Slocki. He graduated from Frank Dobie High School with the Class of 1971. He graduated Princeton University with a Bachelor of Science in Chemistry in 1975. He then earned his medical degree in 1979 from the Baylor College of Medicine, and completed his first year internship at the University of Texas Medical Branch Galveston from 1979-1980, and completed his obstetrics gynecological residency in 1980-1983. Dr. Slocki was board certified with the American Board of Obstetrics and Gynecology. He married Patricia R. D'Angelo on January 7, 1978 in Princeton, NJ. Shortly thereafter, the young couple relocated to Texas where they would being their life and raise their children and several foster children. He worked as a physician in the greater Houston area for over 28 years and briefly in SW Wyoming before illness forced his retirement in November of 2014. He was a member of the Wyoming Board of Medicine, American Board of Obstetrics & Gynecology, & Sigma XI. He was also an active member of The Church of Jesus Christ of Latter Day Saints. He was a life-long Houston Astros fan. He enjoyed baseball, fishing, long walks with his dogs, takings pictures of Wyoming wildlife, working in the library at Washington Elementary School, teaching the youth class in church and, most of all, spending time with his family and friends. Survivors include his wife Patricia Slocki of Green River; sons Kenneth J. Slocki of Fort Hood, TX and Philip J. Slocki of Fort Worth, TX; daughters Lauren Slocki-Verdin of Stafford, VA, and Ashley Slocki of Portland, OR; granddaughter Emi Verdin; and cousin Allen Slocki. He was preceded in death by his parents and grandparents. Funeral services will be held at 6:00 pm Thursday, August 30, 2018 at the Green River LDS Chapel, 1000 W 4th N St., Green River. A viewing will be held one hour prior to the services at the church. Condolences for family can be left at www.foxfh.com
To order memorial trees or send flowers to the family in memory of Lawrence Michael Slocki, please visit our flower store.