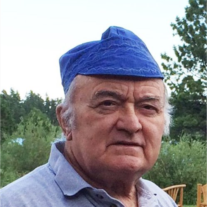 Leland Franklin Warr Jr. May 28-1939 - April 30, 2018 Green River-Leland Franklin Warr, Jr., 78, of Green River, passed away Monday, April 30, 2018 at St. Mark’s Hospital in Salt Lake City, Utah, after a lengthy illness. He was born May 28, 1939, in Salt Lake City, the son of Leland Franklin Warr Sr. and Delsa Wilson Warr. He served a two-and-a-half year Spanish-speaking mission in southern Texas for the Church of Jesus Christ of Latter-day Saints. Afterward he attended Weber State University where he earned a Bachelor’s degree in business and data processing. He married Virginia Woods Warr on October 18, 1966, and together they raised a family consisting of six children. He was self-employed as a welder for over 40 years. He owned and operated LF Warr Welding Inc. and worked in the oil and gas industry. His interests included working in his garages and on his many “tonka toys,” boating and waterskiing any time he could, studying the Spanish language and a darn-good barbequed steak. He loved spending time with his family, grandchildren and his favorite cat, Smokie. He was a member of the Church of Jesus Christ of Latter-day Saints. He loved to serve others and read the Book of Mormon. He is survived by his wife of 52 years Virginia, of Green River; daughter Nicole Malicoat, of Green River; son Steven Warr, of Green River; son David Warr and wife, Jen of Aurora, Illinois; son Darrin and wife Emily of Katy, Texas; son Chris Warr of Conroe, Texas; brother Dennis Warr and wife, Elaine, of Bluebell, Utah; brother-in-law Jerry Morris of Las Vegas, Nevada; seven grandchildren, and several other nephews and nieces. He was preceded in death by his parents Leland Sr. and Delsa Warr, sister Loma Morris and daughter Suzanne Warr. Funeral services are scheduled for 11am Tuesday, May 8, 2018 at the Green River LDS 5th & 7th Ward Chapel. 1255 W Teton Blvd., Green River. Bishop Mike Nelson will officiate. A viewing for friends and family will be from 9:30 to 10:30 a.m prior to the services at the church. Interment will take place following the services at the Riverview Cemetery, Green River.
To order memorial trees or send flowers to the family in memory of Leland Franklin Warr, please visit our flower store.