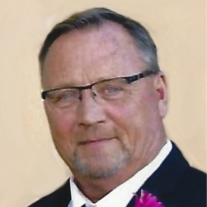 Louie J. Veesart Rock Springs - Louie J. Veesart, 63, of Rock Springs, passed away September 14, 2018 at Memorial Hospital of Sweetwater County after a sudden illness. He was born May 27, 1955 in Great Bend, KS, the son of Lawrence Veesart and Betty Burhenn Veesart. He graduated from Great Bend High School with the class of 1973. Louie married Marilyn Brough on March 8, 1975 in Rock Springs. He was employed by MRC as an industrial salesman for the past ten years. Louie was an avid golfer and also enjoyed bowling and woodworking. He was involved with scouting when younger and was an eagle scout. Survivors include his wife Marilyn Veesart of Rock Springs; mother Betty Veesart of Winnemucca, NV; sons Brian Veesart and wife Carla, and Brett Veesart and wife Krystyna all of Rock Springs; brother Steven Veesart of Fallon, NV; sisters Mary Carlson of Rock Springs and Nona Stegall of Winnemucca, NV; grandchildren Ethan Veesart, Regan Veesart and Victoria Veesart all of Rock Springs; brother and sister-in-laws Douglas & Barbara Brough of Rock Springs, David and Susan Brough of West Valley City, Utah, Linda Brough and Ed Brough both of Rock Springs; one aunt and several cousins, nieces and nephews. He was preceded in death by his father Lawrence Veesart. Memorial services will be held at 1:00 pm Thursday, September 20, 2018 at the Bunning Hall Freight Station, 603 S. Main St., Rock Springs. Inurnment will follow in the Rock Springs Municipal Cemetery. Condolences for family can be left at www.foxfh.com.
To order memorial trees or send flowers to the family in memory of Louie Joseph Veesart, please visit our flower store.