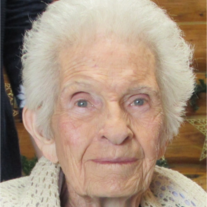 Lydia Allene Dwire Gipson was born May 20, 1930 and passed on January 18, 2018 in Rock Springs, Wyoming. Lydia was born and raised on Garfield Creek near New Castle, Colorado and was a country girl through and through. She especially loved her cows and outdoor yard-work. Lydia spent the majority of her life in the vicinity of New Castle, Colorado. She was well known for her flowers gardens as well as her lemon meringue pie. She was very devoted to her five children and loved her grandchildren and great grandchildren. She was very active in getting a recreation program started for children in Newcastle. For about 26 years, her Dwire Family and Friends picnics brought the community and family together from coast to coast. Another important issue was that each of her children has a personal relationship with God. She married Paul T. Gipson in 1968 after divorcing her first husband, Perry Rodreick. In 2010 Lydia moved to Rock Springs, WY to live with her youngest daughter Patty and her husband Allen. Lydia was preceded in death by her granddaughter Alisa Rodreick, husband Paul, daughter Kathy Crabtree, step-son Phillip Gipson and all of her 7 siblings. Surviving family members include: Children: Judy Rodreick, Dan Rodreick, Patty Smith and her husband, Allen, Shawn Gipson and his wife Lori and step-son Kenny Gipson and his wife Judy. Grandchildren include: April Sharrock, Daniel Rodreick, Carly Rodreick, Kevin Crabtree, Kristen Crabtree Simkins, Ryan Smith, Michelle Smith Miller, Noah Gipson, Kendall Gipson, Simon Gipson and Lucas Kudnra. Step grandchildren include: Kenny Gipson Jr, Gina Gipson Link, Kevin Gipson, Laura Gipson Phillben and Lisa Gipson plus many great grandchildren. Fox Funeral Home Chapel will have a viewing at 3:00 pm, Funeral service at 4:00 pm followed by light dinner at the Young At Heart Center on Saturday, January 27. On January 28th, a grave side service will be held at Highland Cemetery in New Castle, Colorado at 3:00 pm. In lieu of flowers her family requests donations to Hospice of Sweetwater County, 333 Broadway #220, Rock Springs, WY 82901.
To order memorial trees or send flowers to the family in memory of Lydia Allene Gipson, please visit our flower store.