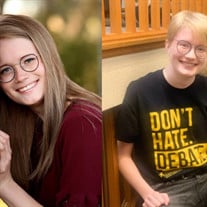 Mack attended schools in Rock Springs starting with preschool at Little Lambs and then attended Northpark, Sage, and Pilot Butte Elementary Schools. Mack attended Rock Springs Junior High and was a 2020 graduate of Rock Springs High School, being named Valedictorian of the senior class. Mack was a member of National Honor Society and received the University of Wyoming Trustees’ Scholarship. Most recently, Mack was a sophomore at the University of Wyoming, majoring in International Studies and was a member of the UW Debate Team.

Mack enjoyed playing in the Rock Springs High School concert and jazz bands. Mack was selected to All-State Band all four years of high school, playing principal clarinet in the concert band during sophomore year and principal clarinet in the orchestra during senior year at the All-State Band Conference. Mack was also selected to leadership positions in the marching band during high school and senior year served as a drum major. Mack always strove to perfect music and enjoyed attending summer band camps and was selected to attend prestigious band events including All Northwest Band and Western International Band Clinic. In addition to clarinet, Mack enjoyed playing the saxophone in the Rock Springs High School Jazz Band.

Mack also enjoyed participating on the Rock Springs High School Debate Team, serving as president of the debate team during senior year. Mack worked tirelessly on debate and during senior year was the Lincoln-Douglas Debate State Champion. Equally important, Mack enjoyed volunteering countless hours to mentoring other debaters to improve their skills. Mack was a highly respected member of the debate community in high school and this continued on into college, where Mack was recently elected president of the University of Wyoming Debate team by peers.

In addition to working on debate and playing musical instruments, Mack enjoyed listening to a variety of music including classical and jazz, attending symphonies and musicals, discussing current events and politics, spending time with friends, and relaxing through meditation. Kelby and Mack had a special sibling relationship and the two of them shared many good memories and inside jokes growing up. Purrlioz held a special place in Mack’s heart for the last three years as the beloved cat.

Mack accomplished so much in 19 years of life, but more importantly had a tremendous positive impact on so many others’ lives. Mack had a beautiful smile and enjoyed making others laugh, even when jokes could be off-color at times. Mack was always willing to lend a helping hand and a listening ear to those in need. In addition, Mack enjoyed volunteer opportunities to help the city of Rock Springs. Making things for others, whether it be a card to cheer them up or a gag gift to make others laugh, was something that brought Mack a lot of joy.

Mack, you are loved by so many and your family and friends will miss you deeply. We will do our best to carry on your passion for pursuing interests and genuine care for others in our own lives. We love you so much and we will see you again. Until then, rest peacefully and be at ease dear one.

A Memorial Service for Mack will be held on Friday, September 17 at 11:00 a.m. in Bunning Park, Rock Springs, WY. Bunning Park is a special place for the family as Mack played in several summer band concerts there and also had senior portraits taken at the park. Condolences for the family can be left at www.foxfh.com.

To order memorial trees or send flowers to the family in memory of Mack (Makayla) Anne Kramer, please visit our flower store.