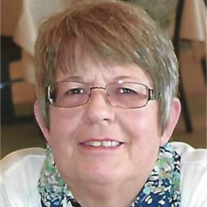 Melinda Jane Ransom Rock Springs - Melinda Jane Ransom, 69, of Rock Springs passed away suddenly at Memorial Hospital of Sweetwater County Wednesday, August 15, 2018. She was born April 18, 1949 in Rock Springs, the daughter of Robert Mottonen and Betty Martin Mottonen. She attended schools in Rock Springs and graduated from Rock Springs High school with the class of 1967. She later attended WWCC and University of Wyoming. Melinda married Douglas Ransom on August 23, 1969 in Rock Springs. She was employed as a loan processor at various banks in town. Later she was the activities director at the Young At Heart Senior Center. She was a member of the First Congregational Church, PEO Chapter L, and Bridge Club. Melinda enjoyed camping, sewing, reading, the outdoors, friends, family and volunteering. Survivors include husband Douglas Ransom of Rock Springs; son Chris Ransom and wife Amy of Rock Springs; daughter Brooke Shassetz and husband Mark of Rock Springs; grandchildren Kennedy and Karsten Shassetz, Shelby, Bailee and Aliza Ransom, Kyleigh and Emily Gann and Nathan Algrim. She was preceded in death by her parents Robert and Betty Mottonen, her parents-in-laws Joe and Doris Ransom, sister Barbara Mottonen, infant children Jonathan and Carrie Ransom. Funeral services will be held at 1:00 pm Wednesday, August 22, 2018 at the First Congregational Church, 1275 Adams Ave., Rock Springs. A viewing will be held one hour prior to the services at the church. In lieu of flowers, family request donations in Melinda's name be sent to Douglas Ransom at 936 Adams Ave. Rock Springs, Wyoming 82901, which will be donated to the Young At Heart Senior Center. Condolences for family can be left at www.foxfh.com.
To order memorial trees or send flowers to the family in memory of Melinda Jane Ransom, please visit our flower store.