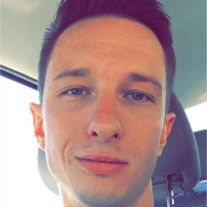 Michael Christopher White Wamsutter - Michael Christopher White, 31, of Wamsutter, passed away March 30, 2018 of injuries sustained in an auto accident. He was born April 15, 1986 in Aurora, CO, the son of Dee Jay White and Christine May Davis. Michael graduated from North Glen High School with the class of 2004. He has been employed as a operations manager at Love’s Travel Stop in Wamsutter for the past 4 years. He was a sports enthusiast. His legacy is “Life’s an adventure. Live, laugh, and love.” Survivors include his parents Dee Jay of Spokane, WA and Christine Davis of Isleton, CA; sister Kayla White of Denver, CO; and grandmother Rae Ann Davis of Littleton, CO. A Celebration of Life will be held at 1:00-5:00 pm Thursday, April 12, 2018 at the Wamsutter Baptist Church, 219 McCormick, Wamsutter, WY.
To order memorial trees or send flowers to the family in memory of Michael Christopher White, please visit our flower store.