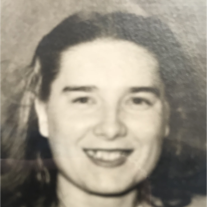 Olga L Groutage Olga Lillian (Pedri) Groutage went home to be with our Lord on July 15, 2018 in Lakewood Colorado. Olga was born in Rock Springs Wyoming on February 22. 1923 to Attilio Henry and Carmella Inez Pedri. After Olga graduated from high school, she worked as a payroll clerk for the mines in Rock Springs. She remained at home with her parents and helped them to raise her baby brother, Wayne John Pedri, for a few years until she became married. Olga Lillian Pedri married Clarence Louis Groutage on February 19, 1959. She became a homemaker after marrying Louis. She loved to cook and take care of Louis and their home. They had no children. She always enjoyed having company come to visit, especially when it was a visit from her sister Florence, brother-in-law Joe, and her niece Bernadine. She also enjoyed taking care of her niece Traci as she was growing up and spending time with her brother, Wayne. Olga’s health began to decline in 2015 when she required 24/7 caregiving in her home. She moved to Lakewood Colorado in November of 2017 to an assisted living facility where she received care until passing. Olga was preceded in death by her parents, brother Wayne, sister Florence Ruby Motto, and her husband Louis. She is survived by her two nieces, Bernadine Anderson of Lakewood and Traci Whitmer of Lucas, Texas, and their husbands, Sven Anderson and Daniel Whitmer. She is also survived by her cousins Ellen Flaim and Shirley Parker. A Mass of Christian Burial will be celebrated at 11:00 AM on July 23, 2018 at Our Lady of Sorrows Catholic Church, 116 Broadway Street, Rock Springs. Visitation and rosary will be held starting at 5 PM. on July 22, 2018 at Fox Funeral Home, 2800 Commercial Way Rock Springs. Interment will take place in the Rock Springs Municipal Cemetery, Rock Springs. Memorial contributions may be made to Hospice of Sweetwarer County. Condolences for family can be left at www.foxfh.com.
To order memorial trees or send flowers to the family in memory of Olga Lillian Pedri Groutage, please visit our flower store.

Our Lady of Sorrows Catholic Church