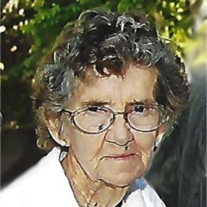 Patricia Lillian Toone March 28, 1927 - June 20, 2019 Green River - Patricia Toone, 92, passed away peacefully on June 20, 2019, at Mission at Castle Rock Rehabilitation Center. She was preceded in death by her husband, Dorland E. Toone, and son, Robin M. Toone. Patricia is survived by son, Barry F. Toone, grandson Justin and wife Erin Toone, granddaughters Crystal Toone, Jeannie Toone, one sister Ann Howell and husband Lyle, and daughter-in-law Aldena Toone. Pat retired from the Union Pacific Railroad after a career of 40 years. She enjoyed working and spending time in her gardens which were full of flowers each Spring and Summer. Her grandchildren were her pride and joy and she loved spending time with them. She was a member of the Immaculate Conception Church and was a faithful practioner of her faith. Pat's parents were Matthew and Lillian Noud. She was a farm girl born in Kansas and one of 12 children. She met her future husband, Dorland Toone while visiting family in Green River. They lived their 70 year marriage in Green River with a brief move to Idaho. A believer in helping those less fortunate, she was a consistent supporter of numerous charities during her life. Pat was also quick to tend to family, friends and neighbors. Her quick wit was appreciated by all and she maintained that wit all her life. She will be missed. A Rosary will be conducted at the Immaculate Conception Church, 900 Hitching Post, Green River, WY on Tuesday, June 25, 6:00 p.m. A Mass of Christian Burial will be held at 10:00 a.m. on Wednesday, June 26 at the Church. Visitation will be held one hour prior to the service. Inurnment will take place in the Riverview Cemetery, Green River. In lieu of flowers, the family asks that consideration be given of a donation in Pat's name to Hospice of Sweetwater County, the Immaculate Conception Church or other charity of choice. Condolences for the family can be left at www.foxfh.com.
To order memorial trees or send flowers to the family in memory of Patricia Lillian Toone, please visit our flower store.