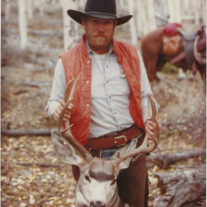 Rick Walter Rick Walter passed away peacefully in his home January 23, 2020 at the age of 74. Born December 12, 1945 in Billings, MT to Harvey and Phyllis Walter, Ricky Lynn was the youngest of four siblings. He graduated from Lavina High School in 1964 then enlisted in the Army. He served his country from 1964 to 1970, including a tour in Vietnam. He was honorably discharged in 1970. He then worked in a warehouse in Havre, as a surveyor for the State of Montana in Cutbank, for the railroad in Harlowton, then transferred to Rock Springs WY. He spent some time mining for gold in Alaska and in the oilfield as a driver and dispatcher before settling in to a career with the BLM. He retired after 21 years of service. An avid outdoorsman, he was happiest spending time in the outdoors hunting and fishing with family and friends. He enjoyed epic quad rides with his brother-in-law whenever possible, elk hunting and packing into the mountains. He also loved music, dancing and playing cards-cribbage, pinochle, & hearts. Rick is preceded in death by his parents, Harvey and Phyllis Walter. Survivors include daughter Christy Bonsell, her husband Kirk and grandson Bennett; daughter Diana Walter, her partner Adam Kappes (Christy & Diana’s mother Joey Austin); son Derk Walter and granddaughter Bella (Derk’s mother Sheri Roden); brother Gary Walter, his wife Carol, niece Cara (Bill) Paul; sister Denise Kallem, her husband Bob Kallem, niece Stacey (Todd) Hecker, nephew Randy Kallem, & niece Cheryl Kallem; sister Cheryl Croy, her husband Mike Croy, nephew Bryan Britt and niece Robin Layton; as well as many grand nieces and nephews. A memorial service will be held Friday January 31, 2020 at 2:00 p.m. at Fox Funeral Home, 2800 Commercial Way in Rock Springs followed by a reception at Santa Fe Trail restaurant in Rock Springs at 4:00 p.m. In lieu of flowers, please make a donation in Rick’s name to your favorite veteran’s organization. Condolences for family can be left at www.foxfh.com.
To order memorial trees or send flowers to the family in memory of Rick Lynn Walter, please visit our flower store.