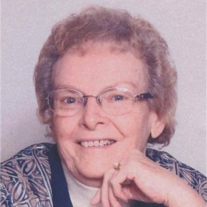 Rozella Blunk, 95, of Rock Springs, passed away October 23, 2019 at Deer Trail Assisted Living surrounded by family. She was born November 21, 1923 on her family farm in Hitchcock, South Dakota, the daughter of Jacob and Bertha Glaze Price. She attended schools in South Dakota and Wyoming. Rozella married Grover Logan on August 30, 1940 in Manila, Utah. They divorced and she later married Harold Blunk on June 24, 1963 in Las Vegas, Nevada. He preceded her in death on November 14, 1996. She was a member of the First Baptist Church where she was baptized in 2001. Rozella enjoyed family reunions, country music, especially George Strait, playing cards, traveling, and dancing in her younger years. Survivors include daughters Sherron Ramich (Bill), Connie Hice (Larry) and Dorothy Savage (Tim), four grandchildren, eleven great-grandchildren and numerous nieces and nephews. She was preceded in death by her husband Harold, parents, son Joe Logan, five brothers and 2 sisters. A celebration of life will be held at a later date. The family respectfully requests any donations be made to Hospice of Sweetwater County. Condolences can be left at www.foxfh.com.
To order memorial trees or send flowers to the family in memory of Rozella Pearl Blunk, please visit our flower store.