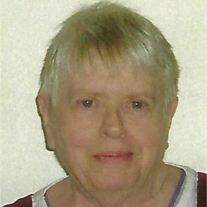 Sally Joan Haverly Rock Springs - Sally Joan Haverly, 85, of Rock Springs passed away at The Mission at Castle Rock Rehabilitation Center in Green River after a short illness. She was a longtime resident of Rock Springs. She was born November 15, 1932 in Ames, Iowa, the daughter of Lyle Haverly and Agnes Luck Haverly. Sally attended schools in Iowa and graduated from Ames High School with the class of 1950. She also attended WWCC and University of Wyoming. She was a veteran having served in the US Air Force during the Korean War. She was employed as a Lead Realty Specialist at the BLM for many years retiring in 1998. She was a member of the Holy Spirit Catholic Community. Sally enjoyed reading, attending book clubs, studying languages and gaining as much knowledge as possible. She was a very giving person and always donating to Tree of Sharing, and the senior center. Survivors include her special friends Judy and Kaylie Johnson, Dorothy Savage, and members of her Book Club Barbara Smith, Carolyn Molson, Joyee Corcoran and Barbara Soweda, and Sister Dorothy of the Catholic Diocese in Kansas, and her friends from the BLM, Renee Dana and Patricia Hamilton. She was preceded in death by her parents Lyle and Agnes Haverly and cousin Bonny Callahan. Memorial services with military honors and inurnment will be held at a later date at the Ames Municipal Cemetery, Ames, Iowa.
To order memorial trees or send flowers to the family in memory of Sally Joan Haverly, please visit our flower store.