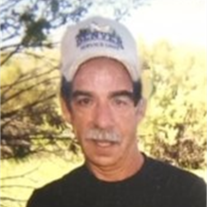 Severino “Tony” Espino Colino passed away on September 21, 2019 in Rock Springs, Wyoming. He was born March 28, 1955 to Jesualdo and Celia Espino in Brime De Urz, Zamora, Spain. Tony married Rachel Corral on February 17, 1985 and became father to Melinda, Michelle, and Rosanna. A year later they had Crystal and then some years later Clarrissa. Tony was a resident of Rock Springs for over 25 years. He enjoyed camping, fishing and hunting at Big Sandy with family and friends. He also enjoyed gardening. He is survived by his daughters, Crystal, Clarrissa, Michelle, and Rosanna, his wife Rachel and many grandchildren, great-grandchildren, brothers, sisters and many nephews and nieces. He is preceded in death by his parents Jesualdo and Celia, brother Gerardo Espino, daughter Melinda Cech Mitchell, great-grandson Oaklan Thompson and mother-in-law Balbina Corral. We will be holding a Celebration of Life at 4:00 pm on October 12, 2019 at the American Legion, 551 Broadway, Rock Springs. Condolences for family can be left at www.foxfh.com.
To order memorial trees or send flowers to the family in memory of Severino "Tony" Espino Colino, please visit our flower store.